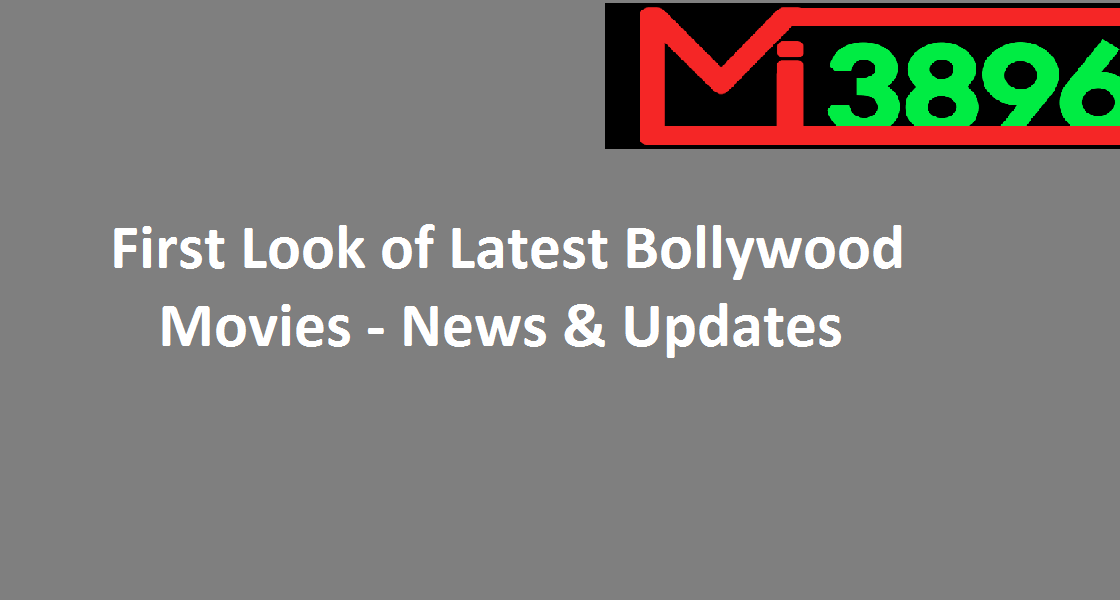 Bollywood is known for making Hindi language movie based in Mumbai and 2nd Larget Film Industry in the world. The Bollywood Industry producing approx 500 movies every year making box office collection of more than Rs.3000 Cr in a year. In the below-mentioned article you will get the details about the First Look of Latest Bollywood Movies

30th August 2019: The skilled actress Taapsee Pannu is shared the first look of his upcoming Bollywood biopic movie Rashmi Rocket. Taapsee Pannu who has a busy schedule in the year 2019 and doing movies back to back and now she is playing the role of an athlete.

30th August 2019: Mimi is an upcoming Bollywood movie which is based on the Journey of unexpected miracle happen in life. Kirti Sanon and Pankaj Tripathi will be seen in the lead roles. The first look of the movie is shared by the lead actress Kirti Sanon on her social media account. Currently, the release date is not finalized for the Mimi movie but shooting has been started.

29th August 2019: The Zoya Factor is a Bollywood Comedy Drama movie which is directed by the Abhishek Sharma. Sonam Kapoor Ahuja and Dulquer Salmaan have played the lead roles in the movie. The movie is about a girl who is the lucky charm for Indian Cricket Team For 1983 and 2011 World Cup. The first look of the movie latest news is shared by the Sonam Kapoor Ahuja on her social media and she is very much excited about her role.

29th August 2019:  Jhanvi Kapoor will portray the biopic of IAF pilot Gunjan Saxena who is also known as The Kargil Girl on the big screen. Gunjan Saxena The Kargil Girl movie is produced by Karan Johar and Apoorva Mehta under the production banner of Dharma Productions. Since the first look shared on social media by Karan Johar the movie is coming under top chart in the upcoming Bollywood movie list.

28th August 2019: The young star Ananya Panday and Ishaan Khatter will be seen in Khaali Peeli movie. The first look of the movie is shared by the producer Ali Abbas Zafar on his social account, also he is making his debut as a producer in the movie. Maqbool Khan is the director of movie and Khali Peeli movie is expected to be released in June 2020.

23rd August 2019:  After Ek Villain Siddharth Malhotra and Riteish Deshmukh will be seen in their upcoming Bollywood Action Drama movie Marjaavaan. The first look of Marjaavaan movie was shared by the Siddharth Malhotra with the dialogue of the movie on his social media. Marjaavan movie will hit the big screen on 22nd November 2019.

12th August 2019: The superstar Hrithik Roshan has shared the first look of his upcoming Bollywood movie with Tiger Shroff War. After the success of Super 30 movie, the actor will be seen in his next action pack movie which is directed by Siddharth Anand. Since the first look release, the audience is waiting for the movie as they love to watch Hrithik Roshan and Tiger Shroff in the movie.

12th August 2019: On the occasion of Sara Ali Khan’s Birthday, Varun Dhawan shared the first look of their upcoming Bollywood movie Coolie No 1. It is a remake of 1995’s Blockbuster movie Coolie No and expected to get released on May 2020. The Coolie No 1 is directed by David Dhawan and produced by Vashu Bhagnani, Jackky Bhagnani, and Deepshikha Deshmukh. The fan of Varun Dhawan is waiting for the trailer of the movie after watching the first look of it.

6th July 2019: Another biopic Bollywood movie which is getting released in 2020 is 83 movie. Ranveer Singh and Deepika Padukone is playing the lead roles in the movie. The movie is based on winning 1983 World Cup by Indian Cricket in Lords. Ranveer Singh is playing the role of 1983 Indian Cricket Team Captain Kapil Dev and it will hit the big screen on 10th April 2020