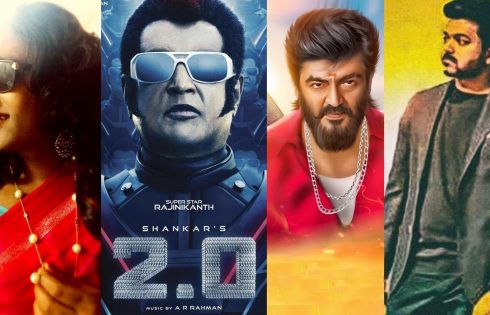 A simple psychological thriller, its narration will send chills down your spine. Every actor has done justice to his/her character in this, especially the lead – Vishnu and the vulnerable psycho villain. The audience is left wondering who the real killer is – and the director with the placement of a red herring makes it difficult for everyone to identify the Anglo Indian villain. Movie Story Written and Directed by Ram Kumar. Music By Ghibran.  Ratsasan Movie Rating As Per IMDB 8.8/10.

Vada Chennai Movie Written & Directed by Vetrimaaran. Music Composed by Santhosh Narayanan and Produced by Dhanush. Main Lead Actress is Dhanush,ameer, Andrea Jeremiah, and Aishwarya Rajesh. This Movie LIke a Crime Movie and Thriller Movie. Vada Chennai Movie Rating As Per The IMDB 8.7/10

Imaikkaa Nodigal Movie Directed by R.Ajay Gnanamuthu and Written by Pattukkottai Prabhakar. Tamil Music by Hiphop Tamizha.This Movie Produced by C. J. Jayakumar and Movie Released on 30 August 2018. Lady Superstar Nayanthara’s ‘Imaikkaa Nodigal’ revolves around how a psycho murderer called Rudra is nabbed by a CBI officer. The Movie Rating As per The IMDB 7.4/10

Below, in this Article, you can find the list of All-time Top-rated Tamil Action Movies.…
Previous Post