Below, In this Article, you can find the list of Top Grossing Telugu Movies of 2017. 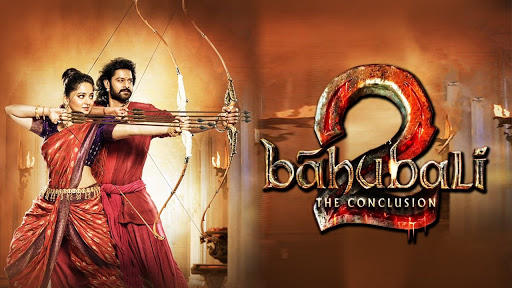 Baahubali 2 movie was directed by S.S.Rajamouli and produced by Shobu Yarlagadda and Prasad Devineni under Arka Media Works. IMDB users rated this movie 8.6 out of 10. Baahubali 2 movie is an All-time Blockbuster hit film and also an All-time highest grosser of the Indian film industry. The production budget of this film was Rs 250crores while the box office collections were Rs.1,807 crores worldwide. The Domestic Nett. gained by this film was Rs.1,115.6 crores. Rebel star Prabhas, Anushka Shetty, Rana Daggubati and Tamannah played the lead roles in this film. Baahubali 2 movie was later dubbed into many languages and received a blockbuster hit, One of the Top Grossing Telugu Movie.

This movie was Megastar Chiranjeevi 150th film, starting his career again after 10 years of gap. V.V.Vinayak directed this film and written by A.R.Murugadoss. Chiranjeevi and Kajal Agarwal played the lead roles in this film. The production budget of Khaidi No.150 movie was Rs.50 crores and received the box office collections of about Rs.165crores worldwide. It was also the 6th all-time highest grossing film of the Telugu Movie industry released on 11 January 2017. Khaidi No. 150 movie was an above average but a commercially successful movie. Box office collections wise this movie took the second position in the list.

IMDB users rated this film 7.2 out of 10. According to the box office collections, this movie took the third position in the list. Jai Lava Kusa movie was directed by K.S.Ravindra and Nandamuri Kalyan Ram produced this film. Jr. N.T.R Played the triple role as a male lead while Rashi Khanna and Nivetha Thomas played the female lead roles. The Film collected Rs.130 crores worldwide while the Domestic Nett. was Rs.90.1 crores. Music was composed by Dev Sri Prasad. Jai Lava Kusa film was released on 21 September 2017 and was screened in Bucheon International Fantastic Film Festival in Category of “Best of Asia” in South Korea, Top Grossing Telugu Movies.

Spyder movie was directed by A.R.Murugadoss and shot simultaneously in Telugu and Tamil Languages.  Mahesh Babu, S.J.Surya and Rakul Preet Singh played the lead roles in this film. It was released on 27 September 2017. With a production budget of Rs.105 crores, it collected Rs.123 crores worldwide with a Domestic Nett. of Rs.84.8 crores. Spyder story is based on how an Intelligence officer attempts to save the city from a psychotic serial killer who kills people just to see their loved ones cry. Spyder movie is a big flop movie but commercially collected well.

It is a Vigilant action comedy movie released on 23 June 2017. Harish Shankar directed this film while Dil Raju produced this film. Allu Arjun and Pooja Hegde performed the lead roles in this film. Devi Sri Prasad composed the film’s music. Duvvada Jagannadham movie achieved four Zee Cine Awards under different categories. The production budget for this film was Rs.50 crores and the gross collected by this film was Rs.119 crores. Domestic Nett. gained was Rs.92.4 crores. Duvvada Jagannadham story is based on how the hero Trained by a high profile cop, an encounter specialist masquerading as a Brahmin priest takes on a real estate crime organization after losing his uncle.